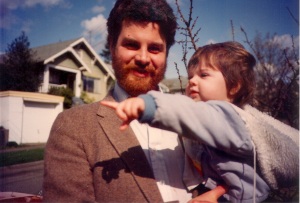 Me at around a year old, with my dad.

When I was a baby, one of the only ways to get me sleep was to drive me in the car. At least that’s how the story goes. My dad said he would take me in the truck and drive the long circle of 35th to Sand Point Way and back around to 90th. If I wasn’t asleep when he came back to the house he’d make the loop again. It was a treacherous way to get a baby to sleep, especially as this was the early 80’s, before detachable car seats, when the whole endeavor could unravel if I woke back up while being moved from the car to the bed. I, of course have no memory of this, but I know the route. I’ve had the early Seattle houses where I lived pointed out to me by both my parents: the apartment on 15th just off University Avenue where I was born, the married student housing near U Village where my sister was, and the Wedgewood house we moved to next. This one I do have memories of, it was up the street from a Catholic school with a playground we dubbed “The wiggly bridge”. When I was just past the age of needing to be driven to sleep, my dad and I would walk down there in the evenings, stopping at the tree by the parish residence to construct “cakes” out of leaves and grass.

I don’t know if the driving bedtime rituals were the inspiration behind the story of “Maitlin and the Moon” but it’s hard to imagine they were completely unrelated. “Maitlin and the Moon” was the first in a long, long, series of bedtime stories that my dad told me and my sister nearly every night for years and years. It was the only one I remember being repeated more than once, and the only one in which my sister’s alias, Balin, was not present. Once Balin came on the scene the stories changed nightly, the ongoing adventures of Maitlin and Balin lasting through at least two more houses. The only one of the later stories I remember details of was the one he told to prepare us for the move to Japan. In this story, Maitlin and Balin take a ship to a faraway land inhabited by people with straight black hair and white teeth. I think there may have also been more than one featuring adults slipping on banana peels, during a phase where my sister and I considered this to be the height of comedy.

Because this was my reality growing up, I didn’t realize until much later how absolutely remarkable the ritual was. To have a father who not only sat with his daughters every night when they went to sleep, first between our two futons, and later in the narrow hallway between our separate rooms, but sat there telling original stories night after night, about two little girls with slightly more exciting lives, but with names that rhymed with ours.

My sister, my dad, and me on the porch of the Ballard house.

I know at some point my dad wrote this story down, but I can’t find it, so this is my best recollection of how it went. I think that sometimes he made it longer by having the trip to the moon and back repeated several times before the curtains were closed all the way.

One night when Maitlin’s dad put her to sleep during the full moon, he closed the curtains, but not all the way. After he left the room a moonbeam came in through the window and tickled Maitlin’s cheek, waking her up. She crawled up the moonbeam, and when she reached the moon she curled up into a little ball and fell back asleep on the moon’s broad face. A little while later her dad came in to check on her, but the bed was empty. He saw the open curtain and understood. He went outside and started up the truck, then he drove it in circles faster and faster until it lifted up off the ground and he drove it all the way to moon, and parked. There on face of the moon he found Maitlin fast asleep. He picked her up carefully, buckled her into her car seat, drove back down to earth, carried her to her bed, and tucked her in. Then he made sure the curtains were closed all the way so that no more moonbeams could come inside.